A good friend of mine shared a link with me revealing the trademark for the business name Kaep registered to Infusionsoft.

Initially I didn’t think anything of it. In all honesty, who doesn’t have at least 20 domain names registered that at the time you felt like you better do it before someone else does.

But reading the article I realized this is a bit more serious than that. Not only did Infusionsoft buy Kaep.com, but they also bought a handful of keap-related domain names.

Which makes sense being that infusionsoftsucks.com forwards to Convertkit’s homepage.

Side note…I hate that type of marketing and am really disappointed in Nathan Berry for stooping to such levels to attempt to “steal” leads from Infusionsoft. It seems desperate and doesn’t give off confidence that the company knows how to market effectively.

It’s a sleazy form of marketing in my opinion…

This assumes, of course, that Nathan intentionally did this and it’s not from an affiliate who registered and redirected the domain on their own. Either way, it’s a sleazy form of marketing in my opinion and I wouldn’t ever participate in such activity.

Back to Infusionsoft…I feel like they had to do something “big”. I left some years ago and have maintained all my relationships with some top users. And to hear them express their frustration as of late with the tool and their willingness to leave has been unfortunate.

I never have, and never will, root for a company to fail. Especially in the marketing automation space the more the merrier because it’s the consumer that wins when competition is high.

We will see if this branding move makes Infusionsoft competitive again. Something tells me it’s too little too late, and hopefully I’m proven wrong.

Would love to hear your thoughts, and findings, below if you have any insight. Is there a big acquisition on the horizon? Let me know what you think…

Looks like the new branding is live. I’m trying to look at it with an open mind but can’t help but walk away confused. I think this is common for most rebrands in the initial stage, especially when the brand has been established for so long. But I mentioned below…they HAD to do something drastic to stay competitive.

Here’s what I’m thinking this means…

Let me first qualify this by saying I do NOT have any insider information. I haven’t spoken to anybody at Infusionsoft to validate any of the claims I’m about to make. This is from observations from being in the marketing automation space for a long period of time.

I believe this is Infusionsoft’s way of saying all-in-one is officially dead. People want to be able to easily integrate other tools with their marketing automation platform. What worked in the past absolutely will not work today. That, however, puts Infusionsoft in quite the predicament because they can’t come out and say the all-in-one is dead. However, their actions are showing it.

Keap is an umbrella company in which Infusionsoft falls under. Which leads me to believe there will be other products under that umbrella that integrate directly with Infusionsoft. Essentially this is them creating their own ecosystem, or dare I say “stack”.

In my opinion, this still misses the mark

In my opinion, this still misses the mark. Business owners don’t want you to create your own ecosystems of apps that play well together, they want you to play well with the apps they are already using! In addition, given Infusionsoft’s history of not being able to compete from a software development standpoint I doubt rebranding and repositioning products will solve that at all.

Don’t be surprised if their second app under the Keap umbrella is a connector app that pulls in data from all your current tools and provides some form of business intelligence around them.

Every tool is going for owning more data, I don’t see Infusionsoft not getting into this game. 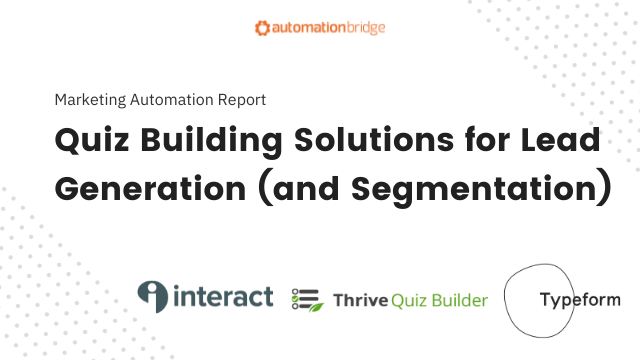